Posted on June 3, 2013 by literaryfriendships

You can feel the excitement, can’t you? It’s finally happening! Tomorrow! Tara Lazar’s The Monstore, illustrated by James Burks, finally hits shelves tomorrow! And Tara was kind enough to stop by for a quick chat about defective monsters, the power of chocolate moguls and carrier pigeons. Without further ado:
*     *     *     *     *     *     *     *     *     *     *
Can you tell us how The Monstore came to be?
The Monstore was a title for months before I did anything with it. Then I had to pitch an idea to an agent and I came up with a premise: “A boy wants to return the monster he bought because it doesn’t spook his little sister.” When I finally sat down to write the story and the boy swung back to the Monstore to complain, I figured the only thing the manager could say was, “Sorry. No returns, no exchanges.” I thought the consequences would then be hilarious if the kid couldn’t unload his malfunctioning monster. And I was right. The story sort of just spilled out after that!

Were you a big reader as a child? What were some of your favorites? Were there any characters you wished would move next door to be your new best friend?
Yes, I loved to read, always. I adore almost everything by Roald Dahl, Judy Blume and William Steig. Charlie and the Chocolate Factory was my hands-down favorite, and the movie is also one of my favorites of all time. (Let me just say: I like Johnny Depp, but Gene Wilder will always be my Willy Wonka.) I didn’t have a character I wanted to live next door to, but I did want to live close to the Wonka Factory. I still do. I even have an outline of a chocolatier tale for a middle-grade novel, if I ever get around to writing it–except the Wonka-like entrepreneur is a villain! I mean, people with power often abuse it, and who could have more power than a chocolate mogul with unlimited access to the sweet stuff we all crave?
Is there any book you wish you’d written?
There’s a novel for adults I read recently and thought if I ever wrote a novel, it would be similar to this one: Memoirs of an Imaginary Friend.  The story is told from the point of view of an Aspberger child’s imaginary friend and it’s just brilliant. The friend, Budo, explains all the rules governing imaginary friends and how some of them look very unusual (because their owners typically forget to imagine them with eyebrows, for instance). Budo moves through two worlds–the real and the imaginary–and it turns out that he has to save his friend from a dangerous situation. I can’t say more because you just have to read it. The author, Matthew Dicks, is a fifth-grade teacher, and he has that eleven-year-old voice down pat. The story felt so real even though it was so fantastical, and that was an amazing feat to conquer. Loved, loved this book so much.
What are you working on now? 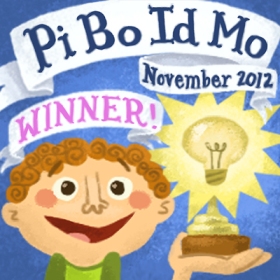