Posted on November 8, 2011 by Audrey Vernick

I met Anna Staniszewski at a retreat for clients of the Erin Murphy Literary Agency—we sat next to each other en route to dinner one night. When we chatted, our debut novels felt so, so far in the future. And now they’re both out in the world, on shelves, and — unbelievably — in the hands of readers.

You’ll want to get your hands on MY VERY UNFAIRY TALE LIFE.

But first, read this.

Publishers Weekly says of your debut, MY VERY UNFAIRY TALE LIFE, “Staniszewski’s debut is a speedy and amusing ride that displays a confident, on-the-mark brand of humor.” First of all: YAY! Second, how about that word, confident, to describe a debut novelist?! Did you feel confident as you wrote this book? What has this first-novel experience been like for you?

That’s an excellent question. I’m not a terribly confident person in general, but I actually did feel relatively confident as I was writing the book since I was primarily writing it for myself. This was the project I would come back to when I was stuck on other things and needed a good laugh. Once other people started to read the book, I got a little less confident. My agent helped me to really tighten and focus the story, which meant cutting out two major characters and drastically simplifying the plot. That process shook my confidence a little bit, but once it was over and I had a shiny new version that was ready for editors to see, my confidence came back. I was very lucky that the folks at Sourcebooks understood my wacky sense of humor and had confidence in my story.

Outside of my picture books, I’m a pretty realistic fiction writer, so I have to ask: at what point did you think, I know! Bloodthirsty unicorns! How do you meld the magic into your also real-seeming world?

Doesn’t every little girl dream of writing about bloodthirsty unicorns one day? No? Oh… As I said above, this was the book that I wrote for my own amusement, so I put pretty much anything in it that would made me laugh. But ultimately, I wanted the story to be a twist on the traditional quest fantasy. Instead of having a hero that’s pulled from the regular world and thrown into a magical adventure, I wanted to write about a girl who’s been playing the hero for years and she’s sick and tired of it. It was fun to throw well-known fairy tale and fantasy elements at Jenny to see how she would react. I’m afraid I was a tiny bit cruel to her; hopefully she’ll forgive me one day.

What were some of your favorite books as a child-reader?

I adored books that transported me to other worlds, real or imagined. Some of my favorites were ANNE OF GREEN GABLES,  A LITTLE PRINCESS, and MRS. FRISBY AND THE RATS OF NIMH. I also loved books set in space or in the distant future–I have a feeling that had something to do with my childhood obsession with “Star Trek: The Next Generation.”

What children’s book character do you wish could have moved next door to younger-you? Why? 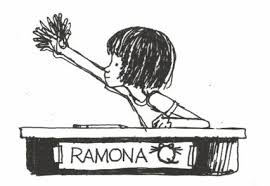 I would have loved to have Ramona Quimby as a neighbor! I was very shy and quiet as a kid, so it would have been great to have a fun, spunky girl to play with. I’m sure we would have gotten into some scrapes together, but I imagine Ramona would have helped to bring me out of my shell.

I like to have a few projects going at a time. Right now I’m polishing a funny tween novel, reworking a light fantasy, and brainstorming a wacky picture book.

Many thanks to Anna for stopping by. You can learn more about Anna by visiting her website. Be sure to check out her book trailer, too.