Posted on November 7, 2011 by Audrey Vernick

The title for today’s post comes from Melissa Conroy’s description of the family stories she listened to as a child. But look at the first two images here–you can see all three there, too, no? Affection. Confidence. Humor.

When you read on, you’ll also see that I worded one question weirdly, asking about her father and leaving out all the other surely interesting folks in her family. Melissa’s father is the author Pat Conroy. As someone who was alive in the mid to late eighties, when  everyone who lived in North America was reading his book THE PRINCE OF TIDES, I couldn’t not ask. (I hope I didn’t understate that; I can’t speak for the other continents.)

And now the Conroy literary legacy extends to the next generation. Though Melissa’s talents, as you’ll see, extend far beyond words…

I love that dolls led you to writing for children and I am a sucker for stories like the one about how you came to write your first book. Can you talk about your dolls and how they led you to write books for kids?

I started making dolls six years ago. At the time, I drew regularly with my daughter. I loved one of her drawings so much, I made a doll from it. That one doll led to many more.  I made dolls from my daughter’s drawings as well as my own characters. Some of the dolls are caricatures of real people while others are made up from whole cloth. I wanted each of the dolls to seem like a familiar person, perhaps a neighbor, friend or family member, so I wrote something about each doll’s personality traits and created a website to post pictures of them. I called the dolls, “Wooberry Dolls.” People began asking for custom dolls from their children’s drawings and it took off from there.

It didn’t take long before the art director at Blue Apple Books saw a picture of one our dolls in Time Out New York Kids. After that, Blue Apple’s publisher, Harriet Ziefert, met me at a craft show to talk about making a children’s picture book using the dolls as characters. I couldn’t have been more happy about the idea. Writing and illustrating a picture book had always been a desire of mine too precious to express.

How did you get the idea for your new book, GRANDMA IS AN AUTHOR?  Did you make a conscious effort to follow up your grandfather book (POPPY’S PANTS) with a grandmother book?

Originally, GRANDMA IS AN AUTHOR was a follow up to POPPY’S PANTS. Poppy and Penelope were to be the main characters. My publisher loved the story, but they wanted to have Elliot Kreloff illustrate it. So, I re-wrote the story for two new characters.  In the end, I prefer the story with Margot and Rusty as characters. An underlying theme to POPPY’S PANTS is the lengths Penelope will go for acknowledgment from her distant, pre-occupied grandfather. Margot and Rusty’s relationship is different. They enjoy working together which made it easier to resolve as a story. The Margot character is inspired by my mother-in-law, Margo Mensing. She is an artist who uses writing quite a bit in her work. In GRANDMA IS AN AUTHOR, there is a grandma character who makes art from toast. The idea came from one of Margo’s projects whereby she collected toast from 50+ friends and asked each friend to write something about the toast they mailed to her. You’d be surprised by the varieties of toast out there.

When you were young, was your father a storyteller? What drew you to stories?

My dad, his brothers and sisters and my mom all told stories. When Dad and his siblings were in the room, an impromptu storytelling competition would commence. The unstated challenge being who could describe the most miserable childhood through humor. As a kid I heard more stories recounted by family members and friends than out of books.  Those stories were told with affection, confidence and humor. It was hard not to fall in love with stories.

Who were some of your favorite characters in the books you read as a child? What books did you love with all your heart?

THE LORAX by Dr. Seuss was the first book to break my heart. I love that book. It gave my young self so much to think about and helped shape my point of view. I wanted to do something important after reading THE LORAX. FROM THE MIXED UP FILES OF MRS. BASIL E. FRANKWEILER and HUCKLEBERRY FINN were favorites as well. 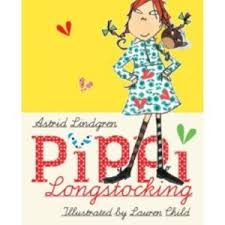 The character I admired the most as a kid was Pippi Longstocking.  I was a tomboy and she was my superhero. I missed out on ANNE OF GREEN GABLES as a kid, but recently read it to my daughter. We both totally fell for Anne, Gilbert, Matthew and Marilla. There’s so many characters to love in that book for so many reasons.

I am in the middle of several works in progress right now, all in transformative stages too fresh to talk about in depth. I’m superstitious in that way.

One must always respect the power of the jinx.

You can learn more about Melissa and see more of her awesome dolls by visiting her website. Check out these stops on her blog tour, too:

Tara Lazar’s Writing for Kids While Raising Them on November 13.

Audrey Vernick writes books for young readers.
View all posts by Audrey Vernick →
This entry was posted in Uncategorized. Bookmark the permalink.